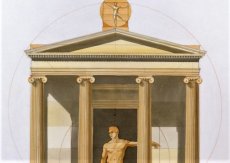 Vitruvius on Architecture
Thoman Gordon Smith
In about 25 B.C. the Roman architect Marcus Vitruvius Pollio presented to the emperor Augustus ten scrolls that contained everything he knew about architecture. Synthesizing his studies of earlier Greek writings as well as lessons drawn from his own design career, the Ten Books on Architecture discussed architectural practice and education; building materials; the correct proportions and elements of the Ionic, Doric, and Corinthian; the design of temples, public buildings, and private houses; and engineering and military planning. More than two thousand years later his masterwork stands as both the most comprehensive architectural text of antiquity and one of the most important design treatises ever written.
Just as Vitruvius set out to catalog the rules and ideals of ancient Greek architecture, Thomas Gordon Smith in Vitruvius on Architecture presents the rules and ideals of Vitruvius himself. This volume contains the five books most relevant to contemporary architecture along with a wealth of visual material: photographs of ancient structures from Greece, Italy, and Turkey; related sculptures, frescoes, and reliefs; hypothetical re-creations of Vitruvius's now-lost illustrations; and a series of exquisitely rendered watercolor plates based on his descriptions. Vitruvius on Architecture is an exceptional accomplishment: a study as relevant to the present as Vitruvius's was to his own day and to architecture since.
Thomas Gordon Smith is a professor at the School of Architecture at the University of Notre Dame and principal of his own classical architectural firm, Thomas Gordon Smith Architects. He is the author of Classical Architecture: Rule and Invention.
Architecture is sometimes the grandeur of man writ large, sometimes it is man’s foolishness writ large. Lately, architecture has been an absurdity worthy of Jonathan Swift, as I have no need of telling you. Yes, we are progressively foolish, no matter the cost.
Architecture was not always the playpen of fools, and the fools who fund them. At one time, in the memory of some yet living, architecture ennobled noble man, that divinely souled creature, image of God. Things change, especially in recent generations when children were encouraged to “change the world”. No one should be surprised that now the world is a childish place, that architecture is alike the scribbles and crumples of children, that in childish fit the architects clench their fists, stamp their feet, and red-faced, demand attention. Yes, we have spoiled the childish architect, alike indulgent parents who refrigerator-door the little geniuses.
Mature architects, reasoned and humble, are rare. Thomas Gordon Smith was among the few mature architects who ennobled man, respected God, as does a father respect and ennoble, and by example lead. You might say, “Thomas Gordon Smith fathered a generation of excellent architects”, and in saying, you would be correct. More correct: Thomas Gordon Smith participated in the Classive Tradition, a tradition of mind, rather than a tradition compassed by time.
By nature, Thomas Gordon Smith (TGS) was inspired to architecture in his native California, Berkeley, land of Bernard Maybeck, where when 14 he saw the beguiling “Temple of the Wings”. And how not: 34 heroic Corinthian columns that blossom from the stone of earth, rise in reason and beauty to create a home suitable to a noble creature, a child of God. This home, this Temple of the Wings, was designed for Florence Treadwell Boynton (1911), acolyte of the Classive dancer, Isadora Duncan.* Difficult to believe, yet, in the early 20th Century of Christ’s ministry, Berkeley, California was identified, “Athens of the West”, and was yet something of an Athens when TGS was there a student of art and architecture, Undergraduate and Graduate.
Paperback ‏ : ‎ 224 pages
ISBN-10 ‏ : ‎ 1885254989
ISBN-13 ‏ : ‎ 978-1885254986
Item Weight ‏ : ‎ 2.4 pounds
Dimensions ‏ : ‎ 8.06 x 0.69 x 10.42 inches
Alle prijzen zijn Inclusief BTW - Algemene voorwaarden
Webshop software: EasyWebshop.nl