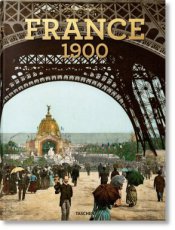 France at the
Turn of the Century
A tribute to the colorful joie de vivre of the Belle Époque
The turn of the 20th century was a golden era in France. It was an age of peace, prosperity, and progress after a series of bruising wars and turmoil within the French Republic, culminating in the Franco-Prussian War, which had ended in 1871. From the ruins of conflict, the Belle Époque brought joie de vivre flourish, a boom in art, design, industry, technology, gastronomy, education, travel, entertainment, and nightlife.
Through some 800 vintage photographs, postcards, posters, and photochromes from the extensive archives of Marc Walter and Photovintagefrance, France around 1900 follows up on TASCHEN’s best-selling vintage photographic collections Italy around 1900, The Grand Tour, Germany around 1900, and An American Odyssey to provide a precious record of France in all its turn-of-the-century glory. With the photochrome technique used in many of the images restoring the past to vivid color, we enjoy a bristling close, bittersweet, encounter with this hopeful age: the brave, stony splendor of the Mont Saint Michel; the icy peaks of Chamonix; and the honey light of the Côte d’Azur.
With an introduction, six essays, and detailed commentary by Sabine Arqué exploring the stories behind the pictures, this is an unrivalled portrait of a nation on the cusp of the century and of its poignant exuberance before the paroxysm of the First World War. While paying tribute to the precious Belle Époque, crushed by the traumas of history, it also celebrates the unwavering allure of La Belle France, its beauty, culture, traditions, and legendary romance.
The authors
Graphic designer, photographer, and collector Marc Walter (1949–2018) specialized in vintage travel photographs, particularly photochromes, of which he held one of the world’s largest collections. He published numerous books featuring images from his collection as well as his own photographs.
Sabine Arqué is a photo researcher, editor, and author. She has collaborated on numerous publications on the themes of travel, the history of tourism, photochromes, and photography.
France around 1900. A Portrait in Color
Marc Walter, Sabine Arqué
Hardcover, 29 x 39.5 cm, 636 pages
Multilingual Edition: English, French, German
Alle prijzen zijn Inclusief BTW - Algemene voorwaarden
Webshop software: EasyWebshop.nl