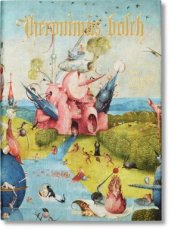 Hieronymus Bosch. Complete Works
Renaissance Radical
An earthly delight not to be missed
In the midst of the realist-leaning artistic climate of the Late Gothic and Early Renaissance, Netherlandish painter Hieronymus Bosch (c. 1450–1516) was more than an anomaly. Bosch’s paintings are populated with grotesque scenes of fantastical creatures succumbing to all manner of human desire, fantasy, and angst. One of his greatest inventions was to take the figural and scenic representations known as drolleries, which use the monstrous and the grotesque to illustrate sin and evil, and to transfer them from the marginalia of illuminated manuscripts into large-format panel paintings. Alongside traditional hybrids of man and beast, such as centaurs, and mythological creatures such as unicorns, devils, dragons, and griffins, we also encounter countless mixed creatures freely invented by the artist. Many subsidiary scenes illustrate proverbs and figures of speech in common use in Bosch’s day. In his Temptation of St Anthony triptych, for example, the artist shows a messenger devil wearing ice skates, evoking the popular expression that the world was “skating on ice”—meaning it had gone astray. In his pictorial translation of proverbs, in particular, Bosch was very much an innovator.
Bosch—whose real name was Jheronimus van Aken—was widely copied and imitated: the number of surviving works by Bosch’s followers exceeds the master’s own production by more than tenfold. Today only 20 paintings and eight drawings are confidently assigned to Bosch’s oeuvre. He continues to be seen as a visionary, a portrayer of dreams and nightmares, and the painter par excellence of hell and its demons.
Featuring brand new photography of recently restored paintings, this exhaustive book, published in view of the upcoming 500th anniversary of Bosch’s death, covers the artist’s complete works. Discover Bosch’s pictorial inventions in splendid reproductions with copious details and a huge fold-out spread, over 110 cm (43 in.) long, of The Garden of Earthly Delights. Art historian and acknowledged Bosch expert Stefan Fischer examines just what it was about Bosch and his painting that proved so immensely influential.
The author
Stefan Fischer studied art history, history, and classical archaeology in Münster, Amsterdam, and Bonn. In 2009 he completed his doctoral thesis “Hieronymus Bosch: Malerei als Vision, Lehrbild und Kunstwerk.” His specialist fields are Netherlandish painting of the 15th to the 17th centuries and museology.
Hieronymus Bosch. Complete Works
Stefan Fischer
Hardcover with 2 fold-outs and ribbon bookmark,
29 x 39.5 cm,
300 pages,
in cardboard box with handle
Edition: English
“Bosch in breathtakingly unearthly depth of field.”
— Die Welt, Berlin
“… the most comprehensive study to date… This book offers an unprecedented insight into how the work of this erudite artist has been viewed under Catholic dogma.”
— RTVE.es, Television Española, Madrid
“Our absolute favourite… a magnificent book… The book is as impressive for its size as for the quality of its reproductions, whose goal is to permit the reader finally to grasp the most beautiful triptychs in their totality… Here truly the magic and precision of the artist are revealed, along with his entire symbolology.”
— Le Parisien Magazine, Paris
“This contemporary of Johannes Gutenberg and Christopher Columbus was, with brush in hand, already as modern and as monstrously playful as the Swiss science-fiction surrealist H.R. Giger 500 years later. He was as sensually sinful as the gallant Helmut Newton and as imaginative as Spain’s ingenious top eccentric Salvador Dalí. Here for the first time all his paintings are published in one book.”
— 10 vor 10 (SRF 1), Zurich
“TASCHEN’s new book on Bosch is surely the most lavishly produced monograph ever published on the artist. Weighing almost ten pounds, its three hundred pages include superb colour reproductions of Bosch’s paintings and drawings, supplemented by numerous enlarged details that allow us to examine the details of Bosch’s fantastic imagery with a clarity seldom possible, even when we confront them in a museum gallery.”
— The Burlington Magazine, London
“Sumptuous! That’s the adjective that comes to mind when leafing through the titanic volume that TASCHEN – truly now the temple-guardians of world art – have devoted to Hieronymus Bosch. An almost exhaustive work combining luxurious illustrations and commentaries of exceptionally fascinating scholarship; reading this volume requires time and attention if one is to grasp the full subtlety of the delirious or Dantesque visions that sit side-by-side with the most traditional religious representations. Throughout it swarm the myriad strange creatures born directly of the artist’s prodigious imagination. Such opulence makes of this jewel of the bookcase both a work of art and a testimony to the magnificent artistic prodigality of the man.”
— Le Nouvel Observateur/ Blog Nomade’s Land, Paris
“You step into this majestic homage to Hieronymus Bosch as you might into a film on a Hollywood cinema screen… No second thoughts: buy this immense book full of often scabrous images. They will surely make of you an inspired being. The reproductions have immense presence, often over the full double-spread. The selection of details for enlargement is invariably judicious.”
— Blog des arts, Lyons
“The complete works published by TASCHEN is exceptional in every regard. First and foremost, for the sheer scale of the book. Then there is the quality of the full-page colour reproductions. And the excellent selection of details in extraordinary enlargements… The quality of the explanatory texts is also exceptional.”
— L’Echo Magazine, Geneva
“A measured, scholarly and referenced account of the artist, his period and his workshop practices… An artwork in itself.”
— The West Australian, Perth
“This may be the first time for many of us to actually see Bosch… Bosch’s paintings require close-up textual study. With these pages, there’s no guard to shoo you back or announce closing time.”
— BookForum, New York
“Bosch in breathtakingly unearthly depth of field.”
— Die Welt, Berlin
“… the most comprehensive study to date… This book offers an unprecedented insight into how the work of this erudite artist has been viewed under Catholic dogma.”
— RTVE.es, Television Española, Madrid