Hannah 'Hanneli' Elizabeth Goslar, vriendin van Anne Frank
Hannah 'Hanneli' Elizabeth Goslar (born November 12, 1928) is a former nurse who is best known for her strong and close friendship with diarist Anne Frank. Both Hannah and Anne had attended the Sixth Public Montessori School (now the Anne Frank School) in Amsterdam and then the Jewish Lyceum.
The family lived Zuider Amstellaan (now Rooseveltlaan) 16 II, Amsterdam  hier woonde de familie Goslar
Early life
Hanneli Elizabeth Pick-Goslar was born in Berlin, Germany on 12 November, 1928, the eldest child of Hans Goslar and Ruth Judith Klee. Her father was deputy minister for domestic affairs in Germany until 1933 and her mother was a teacher. Both of her parents were observant Jews. Her mother died giving birth to her third child; the baby was stillborn. In 1933, after the election of Adolf Hitler and the Nazi party to the Reichstag and Hitler's appointment as Chancellor, Hans Goslar was forced to resign his governmental job. After an abortive attempt to move to England, where Hans Goslar could not find work that would allow him to stay home on the Sabbath, the Goslars moved to Amsterdam, the Netherlands. Hannah attended the Sixth Public Montessori school in Amsterdam, where she became best friends with Anne Frank. Anne and Hannah were also best and close friends with Susanne ''Sanne'' Ledermann, who lived in the same area but attended a different school, and later with Ilse Wagner and Jacqueline van Maarsen.
Arrest and concentration camp life
In 1943 on the 20th of  June, Hannah, her father, her maternal grandparents, along with Hannah's younger sister Gabriela ("Gabi"), were arrested and sent to Westerbork, a transit camp, and then eventually to the exchange camp of Bergen-Belsen. Hannah was in a privileged section of the camp because her family had Palestine passports with them. Sometime between January-February 1945, Hannah was briefly reunited with Anne Frank, who was a less privileged prisoner imprisoned at the other side of the camp. Hannah passed Anne a package with some bread and socks in it. Hannah and Gabi survived 14 months at Bergen-Belsen. Her father and maternal grandparents all died of a sickness before the liberation. Hannah and Gabi were the only members of their family to survive the war, and in 1947, they immigrated to Jerusalem, Palestine
FAMILIE GOSLAR 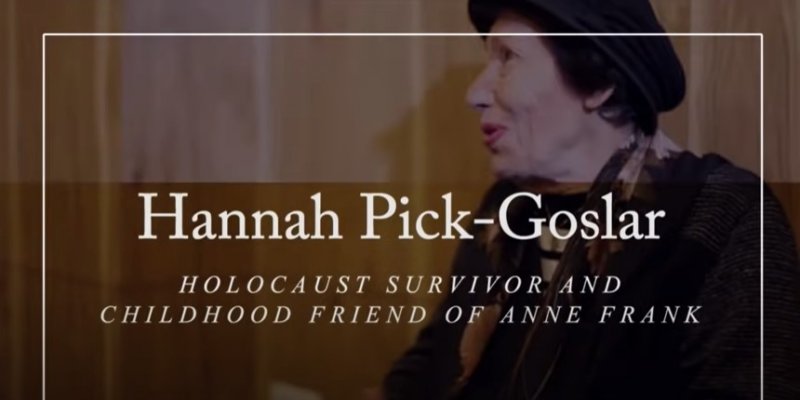